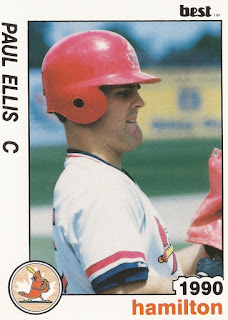 Paul Ellis moved up to AAA Louisville for the first time in 1993 and he looked ahead to the possible next step, the majors, according to The Louisville Courier-Journal.

"When you're playing Class A ball in St. Petersburg or Double-A ball down in Arkansas, sometimes you're tired and you go to the park and you play a little tired," Ellis told The Courier-Journal after being called up. "Not now. Now, everything is a little more intense. Now, you're almost in the big leagues. It's a different feeling."

Ellis spent 50 games at Louisville that year. He never got the call to the majors then or ever. He played eight seasons as a pro. That stint at AAA proved his only stint at that level.

Ellis' career began in 1990, taken by the Cardinals in the first round of the draft, 30th overall, out of UCLA.

The Cardinals selected Ellis after a career year in college where the catcher hit 29 home runs to lead the country. His coach Gary Adams praised more than Ellis' hitting that March.

Ellis played his first year with the Cardinals between single-A Springfield and short-season Hamilton. He hit .253 between them, with eight home runs.

Ellis moved to high-A St. Petersburg than briefly to AA Arkansas in 1992. He hit a solo home run in an August game for Arkansas. He then made Louisville for those 50 games in 1993. He hit .200.

Ellis then returned to Arkansas and stayed there for the next three seasons. He hit .255 in 65 games there in 1996. Ellis then played his final season in 1997 at independent Reno. He hit .337, with 16 home runs, ending his career.