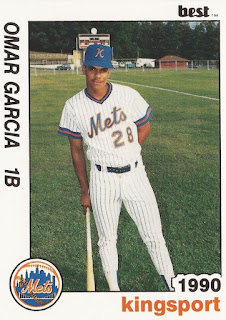 Omar Garcia made it to AAA with the Mets, but the club ultimately let him go over perceptions of lazy play, The Newport News Daily Press wrote.

After catching on with the Braves at AAA Richmond the next year, Garcia got to show his old club he could still play in August 1996 with a late, tie-breaking two-run home run, The Daily Press wrote.

"No lie, it doesn't matter who it's against,'' Garcia told The Daily Press of the home run and who he hit it off. "It's going to feel good when you hit a home run, especially in a tie game like that."

That season turned out to be Garcia's last with an affiliated club. He went on to play in independent ball, Mexico and Taiwan - 18 pro seasons in all - but he never made the majors.

Garcia's career began in 1989, taken by the Mets in the 18th round of the draft, out of his native Puerto Rico.

Garcia made high-A St. Lucie for 1993, scoring the winning run in a June game. He then split 1994 between AA Binghamton and AAA Tidewater, knocking in two runs in a May game for Binghamton.

He played most of 1995 at Norfolk, singling and scoring in a May game and flashed his glove in a July contest. He made the AAA All-Star Game in in July and hit .309 on the year.

By the end of the year, though, Garcia got sent back to Binghamton for failing to hustle on grounders and popups, The Daily Press wrote.

"I just feel like that's a good place for him to work on his base running," Norfolk manager Toby Harrah told The Daily Press. "He needs to improve on that part of his game."

Garcia played 1996 at Richmond, hitting .264. He then started his run in Mexico, playing there for part of each season through 2004. He played briefly with the Reds at AAA Indianapolis in 1998 and in independent ball in 1999 and 2000.