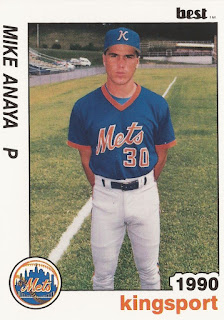 Mike Anaya waited a couple months, but he chose to sign. The graduate of Albuquerque's Valley High School was turning pro, The Albuquerque Journal wrote.

"It's surprising. I didn't think this would ever happen," Anaya told The Journal. "I'm just going to give it all I have, just like in high school. It's a dream."

Anaya took what he had and turned it into time in four pro seasons. He made it to single-A, but no higher.

His career - and his life - almost ended in rookie ball, according to The Journal, as he suffered severe injuries in a car accident. He came back from that accident to play again.

Anaya's career began in 1988, taken by the Mets in the 14th round of the draft out of Valley.

Anaya then moved to rookie Kingsport for 1990 and started strong. In his first three outings, he gave up no earned runs in seven innings of work. Then came the accident.

Driving back from a nearby away game, Anaya lost control of his car and struck a large mason block, The Journal wrote. His injuries required many stitches and ended his season.

"They (the Mets) thought I was going to be (emotionally raw) but I wasn't," Anaya told The Journal of his return in 1991. "I just wanted to get back to playing again, to get my mind off it."