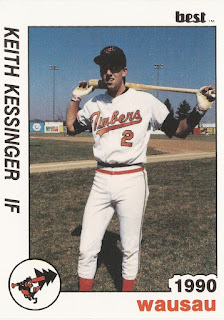 Keith Kessinger knew what it meant to have a major leaguer for a father, he told OleMissSports.com. His father Don Kessinger played 16 seasons in the majors.

It's just, Kessinger didn't hear about that from his father.

"When you have the name Kessinger on your back, yeah there was pressure there, but not from him," the son told OleMissSports. "My dad was proud of me as long as I was doing the best that I could do, whatever that was."

For the younger Kessinger, the best turned out to be a professional baseball career that also reached the majors, though for a far shorter stint.

Keith Kessinger's career began in 1989, taken by the Orioles in the 36th round of the draft out of the University of Mississippi.

At Ole Miss, Kessinger played both baseball and basketball. He hit a game-winning three-pointer in a February 1987game against Tennessee. Tennessee coach Don DeVoe praised Kessinger afterward, telling The Associated Press "Kessinger's got a lot of poise."

With the Orioles, Kessinger started at rookie Bluefield. He hit .273 over 28 games. He then played 1990 between single-A Wausau and high-A Frederick.

He started 1991 back at Frederick before being purchased by the Reds in July and sent to single-A Cedar Rapids. He hit just .198 on the year.

Kessinger spent all of 1992 back at Cedar Rapids, then split 1993 between AA Chattanooga and AAA Indianapolis. He improved his average to .299 between them and earned his trip to Cincinnati.

Kessinger debuted with the Reds Sept. 15, getting into 11 games down the stretch. He picked up 7 hits in 27 at bats. He recorded a home run against the Giants with one of his hits, his only home run in the majors.

He then returned to Indianapolis for 1994, moving to the Cubs system in a trade for 1995. He played that year between AA Orlando and AAA Iowa and the next year back at Iowa, rounding out his professional career.

Kessinger soon started a coaching career. He signed on with Carson-Newman College in Tennessee in 2000. Two years later he went to Arkansas State.

In 2016, Kessinger serves as a broadcaster for Ole Miss baseball games and works in real estate.