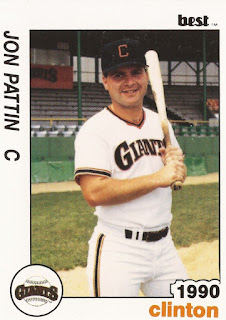 Jon Pattin decided he wanted a more stable career. He had to finish  school, he told his hometown Lawrence Journal-World in May 1992.

That decision came after another spring where the son of ex-major leaguer Marty Pattin had been earmarked for single-A. It was time for him to move on, he told The Journal-World.

"I was born into baseball," Pattin told The Journal-World. "All my life I've wanted to play in the big leagues. You have to get a lot of breaks. You have to be in the right place at the right time. Unfortunately for me it didn't happen."

Pattin went to Johnson County out of Lawrence, where he spent his summers playing American Legion ball. The catcher hit a two-run double in a June 1984 game for the Lawrence Legion Hawks. He hit a game-ending three-run shot in a May 1985 game. By that June, Pattin was hitting .512.

A Pattin grand slam in an August 1985 game led to a rain-shortened win for Lawrence.

"I haven't gotten a lot of pitches to pull this year," Pattin told The Journal-World after that game "When the ball's up and on the outside part of the plate, I try to go that way."

With the Giants, Pattin started with single-A Clinton. In 20 games that year, Pattin hit .279. He stayed at Clinton for 1990, getting into 46 games that year. His average dropped to .135.