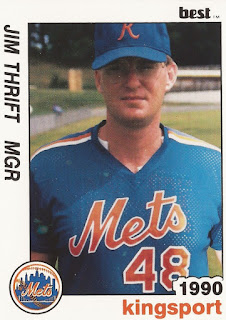 He soon started a new career as a minor league manager. Thrift told UPI that he still har the same goals.

"I decided a long time ago I would get to the big leagues one way or another," Thrift told UPI in March 1988. "It would be either as a player or a manager. But I would get there."

Thrift continued on for more than a quarter century as a manager and later as a scout. He never did make the majors himself, but he worked to help others get there and find those who could.

Thrift's long career in the game began in 1984, taken in the 28th round of the draft by the Athletics out of Winthrop University.

Thrift's playing career lasted that one season. He played at short-season Medford. In 17 games, he hit just .081.

Thrift joined the Pirates for 1986, managing rookie Princeton as a 25-year-old in 1988. His father Syd Thrift served as Pittsburgh general manager. Jim Thrift moved to independent Peninsula for 1989, then to the Mets and rookie Kingsport for 1990.

Thrift also tried to put some distance between himself and his father, not wanting to follow his dad to the Yankees, according to The Chicago Tribune.

"I don't want to go through the father-son thing again," Thrift told The Tribune. "No thanks."

Thrift managed short-season Pittsfield in 1991 and 1992, then served as hitting coach at AAA Indianapolis for the Reds from 1994 to 1997.

In 1997, he helped young Cincinnati prospect Eric Owens with his batting stance. Owens went on to become a major league regular.

"It was a designed three-week process," Thrift told The Indianapolis Star. "It was something that couldn't be accomplished in three days, and to his credit he understood that."