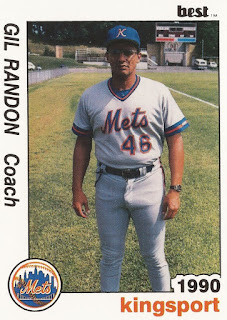 Gil Rondon took the mound for the Houston Astros in front of his hometown fans in Queens in May 1976, but his outing didn't turn out like he'd hoped.

Rondon lasted into the sixth inning, giving up four earned and taking the loss.

"I had a few friends out here watching me," the New York City-native Rondon told reporters afterward. "But I don't think that put any special pressure on me. I think I just beat myself with some bad pitches."

That start marked Rondon's first in the majors. He went on to get 19 total outings for the Astros that year and another four three years later with the White Sox. Those outings marked the extent of his major league career.

He went on to a brief career as a coach in the minors and as a coach for Puerto Rico.

Rondon's career in baseball began in 1973, taken by the Orioles in the third round of the January draft. Rondon is also credited as Gilberto Rondon and his name is misspelled on his Best card as Gil Randon.

He started at rookie Bluefield. He moved to single-A Miami for 1974. He then moved through the Angels system and AA El Paso for 1975, to the Astros and Houston for 1976.

Rondon got into 19 games for Houston, starting seven of them. He went 2-2, with an ERA of 5.70 before back problems limited him.

He played 1977 back in the minors, largely at AA Columbus, but also at AAA Charleston. That April, he pitched seven innings in a win for Charleston, including striking out the side in the seventh.

"I was lucky that my off-speed pitches were working," Rondon told reporters. "I worked on my change-up a lot in winter league ball. Today it really paid off."

Rondon returned to the majors in 1979 for four final outings, these with the White Sox. He gave up four earned runs in 9.2 innings of work. He continued at AAA with the Dodgers for two more seasons, ending his career.