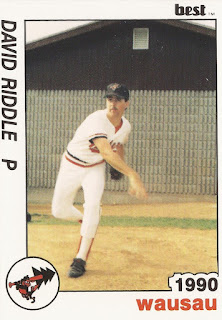 The San Clemente All Stars didn't make the Little League Junior World Series in 2011, but their manager Dave Riddle told the team that there was nothing to be ashamed of, The San Clemente Times wrote.

"I told them the one thing to take out of the game is that it just doesn’t come down to the score," Riddle told The Times after the August loss. "It comes down to all they did to get to this point -- all the days they skipped going to the beach, all the days of practice."

Riddle managed that team of 13- and 14-year-olds, a team that included his son Dylan Riddle, having played himself, years earlier.

Riddle played three seasons in the Orioles system, but was unable to make it out of high-A, his career ending two decades before his team of All Stars' season ended.

Riddle's career began in 1989, taken by the Orioles in the 20th round of the draft, out of San Diego State University.

Riddle graduated from San Diego State, having lettered twice in baseball at San Diego's Madison High School. For Madison, Riddle picked up a win in one late March 1985 game.

At San Diego State, Riddle went four innings of one-hit ball in a March 1988 outing, picking up his first one on the year. In 1987, though, illness limited Riddle to just two appearances, The Los Angeles Times wrote.

Riddle played that first year between short-season Erie and single-A Frederick. He got into 20 games, starting two, going 2-5 with a 4.26 ERA on the year.

Riddle split 1990 between single-A Wausau and Frederick again. He went 5-4 between them in mostly relief work. He also picked up five saves on an ERA of 2.76.

Then, in 1991, what would turn out to be Riddle's final year as a pro, Riddle played the season at Frederick. He got 52 outings, one start, picking up five saves and posting a 4.21 ERA. He picked up one of those saves in August, going three innings, giving up three hits and one run.

It was in May, though, that Riddle got his closest to the majors, if an exhibition between the Orioles and AAA Rochester counts as that.

In the exhibition, Orioles regulars only played briefly, and the pitching was done by minor leaguers. One of the pitchers named for the contest, The Baltimore Sun wrote, was Riddle.