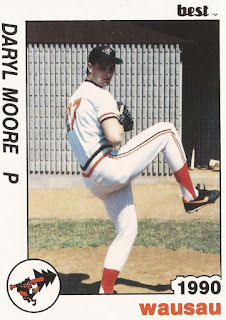 Daryl Moore expressed optimism to his hometown paper, The Gadsden Times in March 1992.

Going into his fourth season, Moore hoped to not only make AAA Rochester, but he also hoped to make the big club in Baltimore, according to The Times.

"I really believe my time is coming to make it to the major leagues," Moore told The Times. "I've had some pretty good years. I believe if I put up some good numbers this season, I'll be playing in Baltimore."

Moore put up good enough numbers to make Rochester. Whatever numbers he put up, he never saw Baltimore.

Moore's career began in 1989, signed by the Orioles as an amateur free agent out of his native Alabama and Gadsden State Community College.

Moore played his high school ball at Gadsden's Litchfield High. He went five innings, giving up one hit in an April 1986 game, then threw eight hitless innings in a May contest.

Moore played 1991 between high-A Frederick and AA Hagerstown. He had a 2.15 ERA between them. He went 6.1 innings over his first four outings at Hagerstown, giving up no runs. In another stretch of four outings, he struck out nine of 12 batters he faced.

Moore's final year of affiliated ball came that year in 1992 between Hagerstown and Rochester. Over 21 outings, he had a 3.00 ERA.

His final year of pro ball came three years later in the independent Texas-Louisiana League. He got into 36 games between Pueblo and Mobile, posting a 3.94 ERA, ending his career.