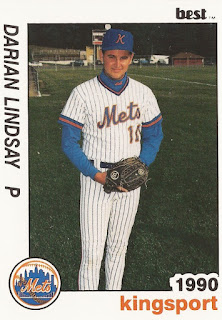 Darian Lindsay had an important decision in late-1988, whether to turn pro or go to college.

The decision was all the more difficult for Lindsay as he was making it from Australia.

"Whatever he chooses, I see him fulfilling his goal," Lindsay's longtime coach Richard Shirt told The Sydney Morning Herald. "You've got to remember it's a million-to-one chance. But if you can get there it's half the battle."

Lindsay got there, ultimately choosing to sign with the Mets. But he never made his ultimate goal of the majors. He made single-A Columbia, but no higher.

Lindsay's career began in 1989, signing with the Mets out of his native Sydney.

Lindsay turned pro after catching the eyes of scouts while playing for the Australian junior Olympic team.

With the Mets, he started in the rookie Gulf Coast League. He got into 22 games, mostly in relief. He turned in a 3.14 ERA, saving three.

He played 1990 at rookie Kingsport and back in the Gulf Coast League. He ended with a 2.32 ERA and three more saves.

That September, he spoke to The Melbourne Age about his life in the minors.

"You learn to live day-to-day," Lindsay told The Age. "You don't plan anything for the future just In case you are called up to play at the next league."

But Lindsay never made the next league. His career ended with that 1992 campaign at Columbia.