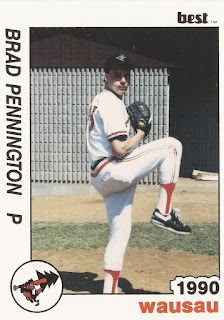 The Los Angeles Times described Brad Pennington's pitching motion in 1996 as "herky jerky," a motion that resulted in both strikeouts and walks.

In one minor league season, The Times noted, he struck out 142, while walking 121.

"I know my walk totals are high and it's a problem," Pennington told The Times. "But if you watch me pitch, I'm not as wild as I was before. I'm around the plate a lot more."

Pennington's career began in 1989, taken by the Orioles in the 12th round of the draft out of Bellarmine College in Louisville.

He started that year at rookie Bluefield. In 15 outings, his ERA came in at 6.58. He walked 74 and struck out 81. After a rough start, Pennington credited his pitching coach Chet Nichols with getting him refocused, according to The Associated Press.

Pennington moved to single-A Wausau for 1990. He made AA Hagerstown and AAA Rochester in 1992. He then made Baltimore in 1993.

Pennington got into 34 games in relief for the Orioles in that first year, ending with three wins, four saves and a 6.55 ERA. He returned for eight games in 1994, giving up a towering home run to Ken Griffey, Jr. at Camden Yards in April.

"I guess he hit it about as well as anyone's ever hit a ball here," Pennington told The Washington Post after that home run.

Pennington then got into eight more games with the Orioles in 1995. He moved to the Reds mid-season and got into six more games. Overall, he had a 6.61 ERA.

Pennington spent 1997 back in the minors. He then returned for 1998 for a single game with the Devil Rays, ending his major league career. He spent one more season in the minors, then one in independent ball, finishing out his playing days.