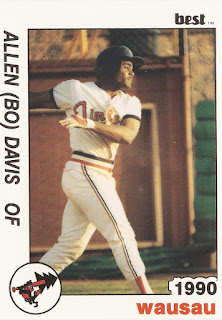 The Fayetteville Observer checked in on regional players in the pros in June 1990, one of them being Bo Davis.

The report on Davis wasn't good. He'd played sparingly and when he did, he couldn't get his bat going. In just 21 at bats, The Observer wrote, he had a .095 average.

Davis went on to play the second half of that season - his second in the pros - at rookie Bluefield. He got into just one more season. He never made AA.

Davis' career began in 1989, taken by the Orioles in the sixth round of the draft out of Lee County High School in Sanford, N.C. Davis was also credited by his given name Allen Davis and as Allen "Bo" Davis.

At Lee County, Davis won all-conference honors in both football and baseball. He graduated that year in 1989.

With the Orioles, Davis played his first year at rookie Bluefield. He hit .205 there in 43 games. He knocked in 12 and stole four bases.

He then moved to single-A Wausau to start 1990 before moving back to Bluefield. He hit .207 overall, including two home runs at Bluefield.

Davis returned to the Midwest League for 1991, playing at Kane County. In 26 games there, he hit .203, ending his brief career.