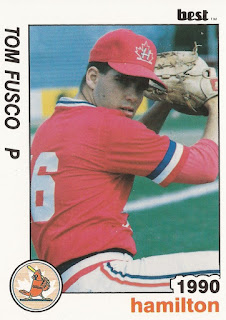 Tom Fusco returned to the Savannah Cardinals roster in late  April 1991 after a spring where he seemingly couldn't find the plate, according to The Savannah News-Press.

But, when he came on in the seventh inning of this tied game, he proceeded to strike out five over the next two innings and gave his team a chance to win, The News-Press wrote.

"I had a rough spring training. At first I lost some confidence," Fusco told The News-Press. "But I just decided to make it a positive thing and work some things out."

Fusco worked things out enough to play that season and the next at Savannah. But he couldn't work them out to play longer. He played three seasons and never made the majors.

Fusco's career began in 1990, taken by the Cardinals in the 37th round of the draft out of Long Island University-Brooklyn Campus. Fusco is also credited by his full name Thomas Fusco.

At Long Island, Fusco won eight games in 1990, throwing a six-inning no-hitter in March. He also won first-team all conference.

He started with the Cardinals at short-season Hamilton. He got into 24 games, starting two. He picked up four wins, one save and a 2.98 ERA.