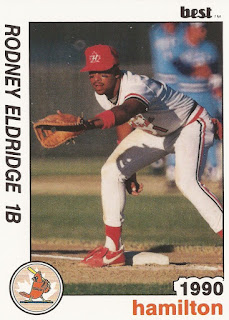 Rodney Eldridge knew what he had to do to improve, he told The St. Louis Post-Dispatch in June 1987.

"Mainly, I just have to concentrate on being disciplined," Eldridge told The Post-Dispatch. "I consider myself a pretty good hitter, but I've probably been worrying too much about hitting the long ball. I just need to work on hitting the ball hard every time."

Eldridge concentrated enough to turn pro the next year. He went on to play five seasons, but he never could concentrate enough to make the majors.

Eldridge's career began in 1988, taken by the Angels in the 39th round of the draft out of Scottsdale. He is a native of St. Louis.

Eldridge started with the Angels at short-season Bend in 1988 and the rookie Arizona League in 1989. He got into 12 games in each season.

His only full season came in 1991 at single-A Savannah. In 126 games, he hit .237. He knocked a bases-clearing double and knocked in four runs total in a July rout. Eldridge plated another run on a double in an August game.

"Games like this are fun," Eldridge told The Savannah Morning News after the July win. "It was nice to get some runs."