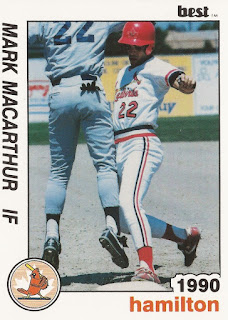 Mark MacArthur's The Master's University Hall of Fame announcement noted his numbers, which remain in the top ten in multiple categories. But it also noted his importance to the program itself.

"He was one of several trailblazers on teams who turned the sport into a vibrant part of the athletic program," MacArthur's announcement reads, "one of those rare four-year players who leave an indelible mark on a program."

MacArthur made the university's Hall of Fame in 2010, after going on from college to the pros. His pro career lasted three seasons. He never made AA.

MacArthur's career began in 1990, taken by the Cardinals in the eighth round of the draft out of The Master's in California.

At The Master's, MacArthur remains ninth all-time at the school in at bats, with 651. He amassed 144 RBI for sixth all-time. He also scored 163 runs, picked up 199 hits, 28 home runs and 61 stolen bases, all still part of the school record book.

He hit two of his 28 career college home runs in an April 1988 game. He also knocked in five.

MacArthur started his pro career at short-season Hamilton as an infielder. He hit just .131 in 47 games, with three home runs.

He moved to single-A Savannah and high-A St. Petersburg and Miami for 1991. He knocked a single in a June game to break up an early perfect game bid. Overall, he hit .180, with 21 stolen bases.

MacArthur played his final season with the Twins at high-A Visalia. He got into 25 games, hitting .210, ending his career.