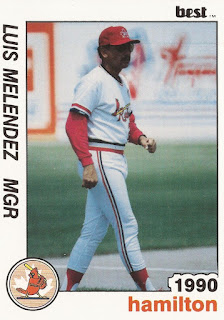 "He's just a kid, but he's a bulldog," Melendez told Baseball America. "He knows what he's doing. He's got the arm to be a big leaguer."

Narveson went on to be a big leaguer. Melendez had been there himself, years earlier as a player. Melendez spent parts of eight seasons there, then went on to a long career as a minor league coach and manager, sending others on to the bigs.

Melendez' long career in baseball began in 1968, signed by the Cardinals as an amateur free agent out of his native Puerto Rico.

Melendez started at single-A Cedar Rapids. He made AA Arkansas in 1969, then AAA Tulsa in 1970.

In April 1975, Melendez launched an extra-inning, game-winner. It was nearly a home run. But, in the situation, the books recorded a single, according to The St. Louis Post-Dispatch.

"I can't hit a ball better than that," Melendez told The Post-Dispatch afterward. "I hit that ball real good."

Melendez moved to the Padres in a trade in May 1976. He played the rest of that season and part of the next there. He played two more seasons in the minors and in Mexico, ending his playing career.

Melendez started is coaching career by 1988. In 1989, he served as manager of the rookie Arizona League Cardinals. In 1990, he managed short-season Hamilton.

He managed single-A Savannah in 1994, watching over pitchers like Matt Arrandale. The starter went on a 14-0 run that year.

"Half the year has passed, and he's still doing it," Melendez told The Post-Dispatch. "You have to see him pitch to believe it."