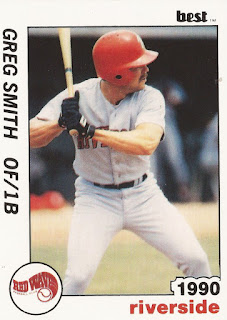 Greg Smith had a big game in this July 1988 game for short-season Spokane. Smith helped his team out to a 7-1 lead with an RBI double, according to The Spokane Chronicle.

He went 3 for 5 overall in the knocking in two and scoring twice in the Spokane win.

Smith had that game in his first season as a pro. He went on to get into two more. He never made AA.

Smith's brief career began that year, signed by the Padres as an undrafted free agent out of Vanderbilt University.