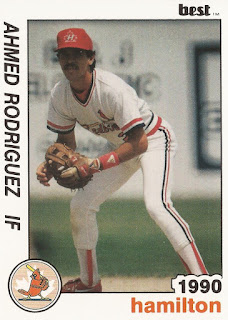 When Ahmed Rodriguez signed as a pro, he likely hoped to emulate another baseball player who hailed from his hometown of Carolina, P.R., Roberto Clemente.

Rodriguez is credited as both living in and being born in Carolina, just east of Puerto Rico's capital city of San Juan.

But, while Rodriguez followed Puerto Rico's most famous player to the pros. Rodriguez could follow no further. He played four seasons, never making the majors.

Rodriguez' career began in late-1988, signed by the Cardinals as a free agent out of his native Puerto Rico.

Rodriguez started with the Cardinals at rookie Johnson City and single-A Savannah. He played mostly at Johnson City, hit .162 between the two spots.

Rodriguez' final pro time came in 1992, back at Springfield. He got into seven games and didn't get a hit, ending his career.