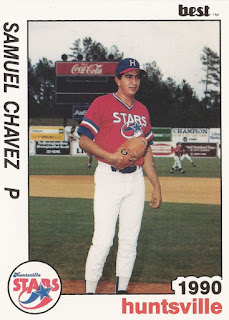 Midway through perhaps his best season as a pro, Sam Chavez dissected the performance of the night's opposing pitcher to The Chicago Reader.

That night's opposing pitcher had a fastball and that was it, The Reader wrote.

"You can't get by on just one pitch," Chavez told The Reader, "not even at this level."

Chavez spoke to The Reader in a feature on his single-A South Bend White Sox and during perhaps his best stretch as a pro. Chavez went 15-3 there, with a 1.91 ERA, winning league Pitcher of the Year honors.

Chavez went on to play in a total of five pro seasons. He made AA, but he didn't make it higher.

Chavez' career began in 1986, signed by the Reds as an undrafted free agent out of New Mexico State University. Chavez is also credited as Samuel Chavez.

At Cedar Rapids, Chavez went 12-11, with a 3.68 ERA. He set a Midwest League record with five pickoffs in one game, after setting a Pioneer League record the year before at Billings with four.

Chavez moved to the White Sox and turned in his stellar performance at South Bend. His 15 wins remained tied in 2010 for second-best in club history, same with his 1.91 ERA.

Chavez played just one more season, with the Athletics in 1990. He played between high-A Modesto and Reno, as well as AA Huntsville. He went 9-6 overall, with a 5.16 ERA, ending his career.