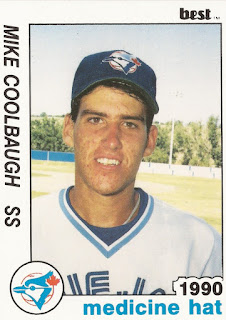 Mike Coolbaugh reflected on his brief life in the majors to The Houston Chronicle in 2005 - and his hopes to get back.

He'd made the bigs for all of 44 games over two seasons, first making it there after waiting more than a decade in the minors.

"It's a good life," Coolbaugh told The Chronicle. "You play a game you love and you get paid to do it. I love to compete, but the main thing is getting to the big leagues. I want to be back in the big leagues and see if I can't improve my game enough to get back there and be good enough to stay. That's the goal."

Coolbaugh's life itself ended up being all too brief. He played one more season after that one, then turned to a new career in coaching for 2007 with AA Tulsa. On July 22, while coaching first base, a line drive foul struck him in the neck. Taken to the hospital, died later that night.

Coolbaugh's career in baseball began in 1990, taken by the Blue Jays in the 16th round of the draft out of Roosevelt High School in San Antonio, Texas. He is the brother of former major leaguer Scott Coolbaugh.

He started with the Blue Jays at rookie Medicine Hat. He hit .190 in 58 games. He hit an extra-inning double in a July game. In another, the shortstop overthrew home after picking up a booted ball.

Coolbaugh then stayed at AAA into 2001, joining the Brewers and AAA Indianapolis to start 2001. In 2000, Coolbaugh joined a team of minor leaguers readying to play for Team USA at the Olympics, though he got cut before play began.

In July 2001, in his 12th season as a pro, Coolbaugh finally made his major league debut. He picked up a hit in his first at bat and hit a home run in his third. He told reporters afterward he wasn't sure the home run was out.

"I was rounding second and I wasn't sure, but nobody said anything so I figured even if it was caught, I was going to keep running," Coolbaugh told Lee Newspapers. "I had a good time. I dreamed about this for a long time."

Coolbaugh got into 39 games for the Brewers that year, hitting .200, as well as a second home run. He returned to the bigs in 2002 with the Cardinals. He got into five final big league games and picked up one more hit.

Coolbaugh then continued back in the minors through 2006, last playing for the Royals at AAA Omaha.

Coolbaugh then moved into coaching, taking a job as a coach with the Rockies at AA Tulsa. His wife later recalled he took the job so his sons, age 3 and 5, could see him on the field.

The line drive foul came in the ninth inning of the July 22 game at Arkansas. He'd only joined the club weeks earlier. His wife gave birth to their third child after his passing.

"Our entire organization grieves at the death of Mike Coolbaugh," Rockies president Keli McGregor told reporters later. "We were shocked and deeply saddened to learn of the accident on Sunday evening. Mike was a great husband, father, brother and friend to so many throughout the baseball community."

In the wake of his passing, baseball adopted a new rule requiring base coaches to wear helmets. An author wrote "Heart of the Game: Life, Death, and Mercy in Minor League America" telling his story. One of his sons, Jacob, made the 2016 Little League World Series with his San Antonio team.

Minor League Baseball also now gives out an annual award to "an individual who has shown outstanding baseball work ethic, knowledge of the game and skill in mentoring young players on the field." The award is the Mike Coolbaugh Award.
1990 Minor League Tally
Players/Coaches Featured: 2,506
Made the Majors:1,009-40.3%
Never Made Majors:1,497-59.7%-X
5+ Seasons in the Majors: 419
10+ Seasons in the Minors:257
Posted by Steve78 at 11:20 PM