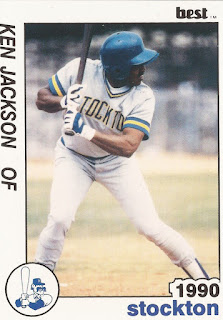 Kenny Jackson returned to the field in 2010 for his home country the Virgin Islands. He served as a baseball team pitcher, as well as a coach in that year's Central American and Caribbean Games.

Team manager Jay Bluehardt was glad to have him, according to The Virgin Islands Daily News.

"Kenny has been around for a while and he can still pitch," Bluhardt told told The Daily News. "He has been a great influence on the younger guys and has been a huge help to me."

Jackson helped out in those games after spending time years earlier in the minors as a position player. He made it as high as AAA, but he never made the majors.

Jackson's career began in 1986, taken by the Royals in the third round of the January draft out of Miami-Dade College. He was born in St. Croix, V.I.

He knocked in two for Baseball City on a April double. In June, he hit a 15th-inning, game-winning home run.

Jackson moved to the Brewers system for 1989, playing that season at single-A Beloit, then 1990 at high-A Stockton.

Jackson made AAA Denver for 1992. He hit a three-run home run in a June game, then a two-run home run in July. Overall, he hit .260 in 94 games, with 12 home runs. It was his last season with extensive time in the minors.

He played four games with the Mariners at AA Jacksonville in 1992, then is credited with playing in Mexico, ending his career.