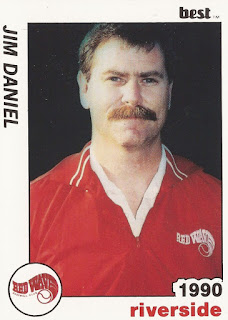 A freak injury sidelined the Padres' Ryan Klesko in May 2004 and assistant trainer Jim Daniel assessed his possible return to The San Diego Union-Tribune.

"It's too soon to tell," Daniel told The Union-Tribune. "We're going to re-evaluate him (Sunday) to see where he's at, and we'll have a better handle on which way he's going to go after two days."

Daniel spent more than two decades re-evaluating players as a trainer with the Padres, both in the majors and the minors. He assessed players' health and responded to injuries.

On three occasions, he was credited with saving lives.

Daniel's career with the Padres began in 1984, after graduating a year earlier from Cal State-Long Beach. He joined the Padres with short-season Spokane.

He arrived with single-A Riverside in 1988 and continued through 1990, then high-A Rancho Cucamonga in 1993.

Daniel remained at Rancho Cucamonga in 1996 when reliever Matt LaChappa collapsed in the bullpen. Daniels administered CPR and continued to do so, by one estimate, for 20 minutes while paramedics responded.

"He did not have a heartbeat," Daniel told The Los Angeles Times.

LaChappa survived, having suffered a massive heart attack, and Daniel was later credited with saving LaChappa's life. He was also credited with his response to players on two other occasions to save their lives.