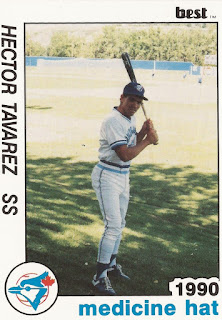 Hector Tavarez played in three countries during his career, including his home country of the Dominican Republic.

He played as a pro for two Canadian teams and one in Florida. But he never played for the Canadian team he wanted to, the one he signed with, Toronto.

Tavarez made it as high as high-A Dunedin in his three season career, but he made it no higher.

Tavarez' professional career began in 1990, signed by the Blue Jays as a 20-year-old out of his native Dominican Republic. He's listed as having been born in San Marco and having lived in Haina.

With the Blue Jays, Tavarez started at rookie Medicine Hat in Alberta. He got into 39 games and hit .279. He knocked in 12 runs and stole four bases while playing largely at short. He also played a game at second.

Tavarez returned to Medicine Hat for 1991, getting another 46 games and hitting .291. He also got one game at short-season St. Catharines. He picked up one hit in his only at bat there.

Tavarez played his final season in 1992 at Dunedin. He played in 26 games, hitting .278, ending his career.