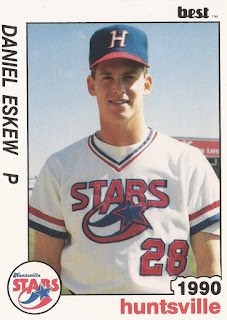 One of Dan Eskew's rival high school hitters could only praise the McGavock High School product to The Nashville Tennessean.

The occasion for the praise was The Tennessean naming its 1984 All-Metro team. Eskew won Player of year in his class.

"Dan's ball comes in real hard, he has a fluid motion that kind of fools you," Dejuan Buford told The Tennessean of Eskew. "At first, you think all he has is a fastball but he's got a mean slider, too."

Eskew went on from Nashville's McGavock High to play in college and in the pros. His pro career lasted four seasons. He made AAA, but not the bigs.

Eskew's pro career began in 1988, taken by the Athletics in the sixth round of the draft out of the University of Tennessee. He also played at Indian River Community College in Florida.

Eskew finished out his high school career with a state title, throwing a no-hitter along the way.

With the Athletics, Eskew started at short-season Southern Oregon and single-A Modesto. He went 5-4 between them, with a 3.72 ERA. Eskew then played 1989 back at Modesto, getting 15 starts and turning in a 4.06 ERA.