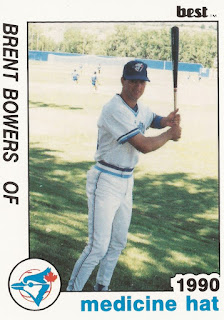 For a Brent Bowers interaction with an umpire, this one was actually tame.

Deep into his only stint in the majors in 1996, Bowers knocked what amounted to his 12th big league single. The first-base umpire Dale Scott called for the ball, The Baltimore Sun wrote.

"I think he thinks that was my first big-league hit," Bowers recalled telling first baseman J.T. Snow when asked, The Sun wrote

Years later, another Bowers encounter with an umpire also made news, this one for a homophobic tirade the independent league manager directed at a league ump. It eventually cost Bowers the season.

Bowers' career in baseball began in 1989, taken by the Blue Jays in the second round of the draft out of St. Laurence High School in Illinois.

Then, for 1996, he signed with the Orioles as a free agent. After playing at AA Bowie and AAA Rochester, Bowers got his call up to Baltimore in August.

With the Orioles, Bowers got into 21 games down the stretch. He picked up those 12 hits, hitting .308. That one pegged by the umpires as his first, however, turned out to be his last.

Bowers returned to the minors for 1997, playing at AAA with the Phillies. He went on to play in the minors with the Mets, Cubs, Blue Jays and Reds. He also played in independent ball and in Korea. He last played in 2002 with Independent Solano in the Western League.

The later umpire interaction came July 31, 2010, as Bowers managed Edmonton. Arguing a call with the crew chief, who is gay, Bowers unleashed a homophobic slur-laden tirade. Sports Illustrated carried much of the verbal attack based on the umpire's official report.

The league first suspended Bowers two games, then, after a protest from fellow umpires, for the season, SI wrote. Bowers resigned days later.

"I went over to him and I said those words," Bowers told an Edmonton TV station later, according to SI. "If I had 10 minutes to look back, I've grown up more in three days than ever before."