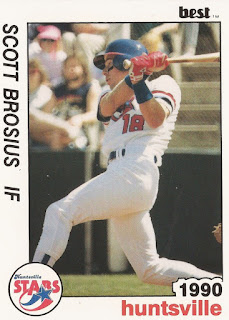 Few people could have seen Scott Brosius' 1998 season ahead of time, but the Yankees did.

After a down year the year before, the Yankees picked him up in a trade. He then proceeded to hit .300 and made his first All-Star team. More importantly, he also came through for the club in the playoffs, winning World Series MVP.

"When you first looked at his starts and saw he hit .203 (in 1997), you're thinking: Who the heck is that?" teammate Chili Davis told The Chicago Tribune that October. "But we went after Scott Brosius instead of more established third basemen. Somebody deserves the 'genius' tag on him."

Brosius made a home for himself over four seasons in New York and he continued the heroics, including a 2001 game-winning World Series home run.

Overall, Brosius played in 11 major league seasons between the Athletics and the Yankees. He got into more than 1,100 career games, hit 141 career home runs and hit .257 on his career.

Brosius' career began in 1987, taken by the Athletics in the 20th round of the draft out of Linfield College in Oregon.

Brosius started with the Athletics at short-season Medford. He made AA Huntsville in 1989 and then AAA Tacoma briefly in 1990. In 1991, he got his first look at Oakland.

Brosius got into 31 games for the Athletics that first year. He hit .235. He homered in his debut that August. He also hit a double and made a key play in the outfield, his first time at that position in three years.

"Anything to get in the game," Brosius told reporters afterward of his turn in the outfield. "I'm not sure this will sink in until after the season. I don't think my feet touched the ground when I was running the bases after the home run. I was on Cloud Nine."

For 1998, he moved to the Yankees, sent there in exchange for Kenny Rogers. That October, the Yankees celebrated another championship and Brosius celebrated a World Series MVP. He went 8 for 17 in the series, hit two home runs and knocked in six in the Bronx sweep.

"There's certainly some satisfaction in how this has worked out," Brosius told reporters afterward. "But I also just feel very lucky to be in this position, how things have changed from last year, it's just an unbelievable turnaround."

"I still feel like I could play, but I never wanted the game to feel like work," Brosius told The Associated Press then. "I never wanted to play the game when my heart was in two different places, and I was getting to that point where a huge side of me just wanted to be home, and I still had a job to do out in New York."