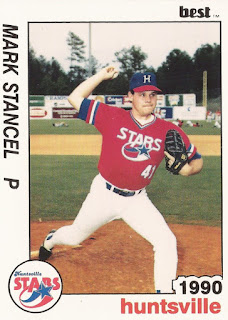 The bases loaded and nobody out in this June 1988 game, Modesto reliever Mark Stancel came up big, according to The Reno Gazette-Journal.

Stancel ended that threat in his third season as a pro. He went on to play in three more campaigns. Stancel's career - and soon his life - were soon cut short by cancer.

Three years after his career ended, Stancel passed away at the age of 29.

Stancel's career began in 1986, taken by the Athletics in the seventh round of the draft out of Hinds Community College in Mississippi.

Stancel started with the Athletics at short-season Medford. He went 5-2 over 21 relief outings, with a 3.33 ERA. He also saved five games.

Stancel played 1989 largely at AA Huntsville, also getting some time back at Madison. He went 6-3 at Huntsville mostly in relief. He picked up his third win in a June game.

His final pro season came in 1990, back at Huntsville. He went 5-8 over 46 outings, four starts, with a 4.39 ERA. He also saved seven games. He picked up his fifth win in an August game, throwing two perfect innings.

By the next July, the Mark Stancel Fund had been created to help Stancel, who had been diagnosed with brain cancer. Stancel's old team the Modesto A's held a benefit auction and raffle. The Oakland Athletics donated items to help raise money.