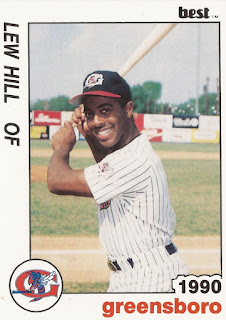 Albany-Colonie starter Andy Pettitte was trailing in this April 1994 game and his designated hitter Lew Hill helped change that, according to The Schenectady Daily Gazette.

With the AA Yankees down 6-5, Hill knocked a single, tying the game. Hill's team would soon take the lead and the future big league star Pettitte would get the win.

Hill was in his eighth professional season that year. Hill, though, was not a future major leaguer. He made it to AAA the next season, but he never made the bigs.

Hill's career began in 1987, taken by the Yankees in the ninth round of the draft out of Collinwood High School in Ohio.

Hill played his first year between short-season Oneonta and the rookie Gulf Coast League. He hit .203 in 45 games.

Hill moved to single-A Greensboro for 1990. He hit just .196, stealing 19 bases. He also returned to Greensboro the next two seasons.