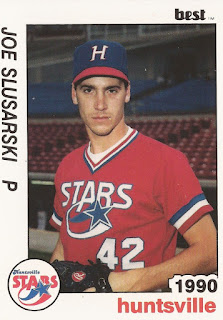 Joe Slusarski summed up his career to The Springfield State Journal-Register years after it concluded with the phrase mental toughness.

Slusarski had to have that over his more-than decade in the game. After making the bigs for stretches over two seasons, he went through a stretch where he saw minimal time in the bigs - before finally becoming a major league regular for a single season a decade in with the Astros.

"Be ready when you get the ball. Do your job. Be prepared as many times as you can," Slusarski told The State Journal-Register. "You've got to be ready to go out there even without your best stuff, and still get outs."

Over his seven seasons, Slusarski saw time with the Athletics, Brewers, Astros and Braves. He got into 118 games as both a starter and reliever, went 13-21 overall and saved three.

Slusarski's career began in 1988, taken by the Athletics in the second round of the draft out of Lincoln Land Community College and the University of New Orleans.

The Athletics took Slusarski as he prepared for the 1988 Olympics, selected to play for the U.S.A. at the Seoul games.

With the Athletics, Slusarski hit the field in 1989 at single-A Modesto. He played 1990 at AA Huntsville and AAA Tacoma. In April 1991, he made his major league debut in Oakland.

He went seven innings in his first start, giving up five hits and no runs - all after scrambling to make the club and arriving to find his name misspelled on his uniform, according to The Washington Post.

"It's something else, isn't it?" Slusarski said after the game, according to The Post. "It's like Fantasyland."

Over the next five seasons, Slusarski saw the majors only once, in 1995 with the Brewers. He got into 12 games in relief. He saw time in Taiwan in 1997. He otherwise played in the minors.

Slusarski returned to the majors in 1999 with the Astros. He got into three games that year and then a career-high 54 games in 2000. Slusarski also recorded his first of three major league saves that year, going three hitless innings in a May game.

"This is something that feels very nice and I've been ready for," Slusarski told reporters afterward. "I've been in and out of the bigs for 10 years and this is nice. I just need the work."

Slusarski returned for one more season, spending time in 2001 between the Astros and the Braves.