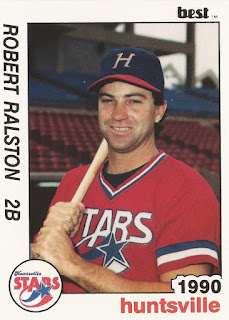 Bob Ralston explained his approach to coaching to The San Jose Mercury News in 2013.

By that point, he'd coached in the minors, high school and college. He'd also played seven seasons in the minors. In 2013, he served as head coach at Cal State East Bay.

"I'm a firm believer in being a good teacher," Ralston told The Mercury News that April. "We try to teach the kids how to play the game the right way. We try to give them positive feedback."

Ralston's career in baseball began in 1984, taken by the Twins in the sixth round of the 1984 draft out of the University of Arizona. Ralston is also credited as Bobby Ralston and Robert Ralston.

With Arizona, Ralston led his team with a .363 average in 1984, after hitting .336 the year before. He also was named a Baseball America First Team All-American in 1984.

Ralston started off the 1984 season strong for Arizona, picking up four hits in a January game, according to The Arizona Republic.

"It's nice to get started on a positive note," Ralston told The Repubic after that contest. "It was important to me because I didn't have a good fall with the bat."

Ralston's final pro time came in 1990 with the Athletics at AA Huntsville. He hit .147  in 36 games, ending his playing career.

Ralston soon turned to coaching. He first served as infield coach at Cal in 1990 and 1991 and then as an assistant coach at Diablo Valley College in California from 1992 to 1994, according to his East Bay bio. He then turned head coach at St. Patrick-St. Vincent High School in Vallejo in 1995.