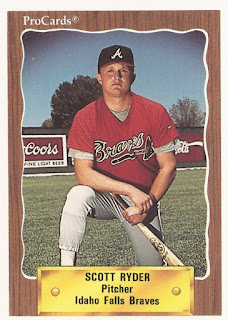 Scott Ryder got to see some of the Braves system in 1991 - three different squads to be exact.

The pitcher played between rookie Pulaski, high-A Durham and single-A Macon, getting 22 appearances, eight starts between them.

"It's been fun these past few weeks," Ryder told his hometown Lyndhurst Commercial Leader that August. "I move one place, stay there for two or three weeks, and then they move me somewhere else."

Ryder went on to play in a total of five professional seasons. But, for all his moving, he never moved higher than high-A.

Ryder's career began in 1990, taken by the Braves in the 29th round of the draft out of Georgia Southern University.

At Georgia Southern, Ryder won 11 games his junior campaign in 1990, striking out 128 along the way in helping his club to the College World Series. Along the way, Ryder picked up a win with four relief innings to upset defending champion Wichita State in the regional.

With the Braves, Ryder started at rookie Idaho Falls. He started 14 games, turning in a 9-5 record with a 4.29 ERA. That August, Ryder threw a no-hitter against Medicine Hat, winning 2-1.

His nine wins also led the league. He picked up his sixth win against Salt Lake in late July, pitching into the sixth inning and winning his fifth-straight.

He played 1992 exclusively at Durham, then started 1993 there. He got into 10 outings that year, giving up 14 earned in 23 innings, ending his affiliated career.