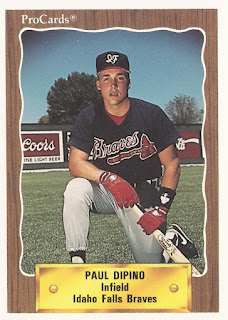 Paul DiPino III committed in April 2016 to play his college baseball at a North Carolina school and had some thanks to hand out, according to CrabFest.biz.

DiPino first thanked God. He then turned to his coaches.

"I would like to thank all the coaches that have helped me along the way, especially my Dad," DiPino told the site. "He has be instrumental in my development and has given me great guidance through the process. He has taught me the importance of being a leader and good teammate. He reminds me daily that the game only gives you what you deserve and sometimes it doesn't even give you that."

The article didn't name DiPino's father, but his father appeared to be the same Paul DiPino who played for the Idaho Falls Braves in 1990, the father taking his own experiences and passing them along to the son.

The professional experiences of the Paul DiPino who played for Idaho Falls ended up being brief. He played part of a single season as a pro, never making it out of rookie ball.

DiPino's career began and ended in 1990, signed by the Braves as an undrafted free agent out of Elizabethtown College in Pennsylvania. He went to Elizabethtown out of Calvert Hall High in Baltimore.

At Elizabethtown, DiPino made the all-district region team in 1987.

With the Braves, DiPino played the 1990 season at rookie Idaho Falls. The infielder's career lasted all of four games. He picked up two hits and one walk in 10 plate appearances, ending his short career.