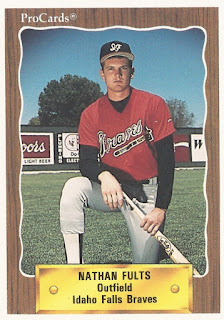 Nathan Fults took a critical look at his decision to turn pro or attend college in June 1989, according to The Nashville Tennessean.

He assessed the state of the Braves rookie league team. He also secured money for his future schooling, should his pro career not work out, and he made his choice, The Tennessean wrote.

"I looked at the situation and realized the Braves only had one guy bat-ting above .300 on the team and I had batted .444 this past season," Fults told The Tennessean late that June. "I figured that meant I had a pretty good shot at making the team."

Fults made the rookie league team, but he ultimately needed the schooling money likely sooner than he'd hoped. Fults played two professional seasons. He never made it out of rookie ball.

Fults' career began that year in 1989, taken by the Braves in the ninth round of the draft out of Franklin County High School in Tennessee.

With the Braves, Fults played between the rookie Gulf Coast League and rookie Pulaski. Between them, he hit .221 in 49 games, knocking in 21.