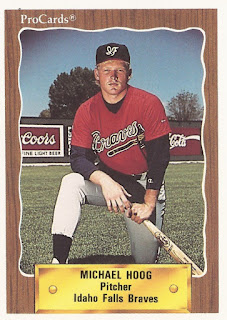 Speaking to The Longmont Times-Call in December 2011, Michael Hoog could only praise his son.

Months earlier, Hoog's son Tyler suffered a horrific injury, paralyzed from the neck down in an ATV accident. But the 17-year-old kept working and stayed positive as he made steady progress, according to The Times-Call.

"He's a hell of a lot tougher than I knew or anticipated," the father told The Times-Call. "I knew he had a lot of mental toughness, but I didn't begin to think it is what it is."

Hoog previously knew the comparatively trivial sense of the term mental toughness, the sports sense. A longtime youth coach, the father once took the field in college and briefly in the pros, setting records at North Carolina and facing hitters as a pitcher in the Braves system.

Along the way, Hoog spent a decade as a high school baseball coach.

Hoog's brief professional career in baseball began and ended in 1990, signed by the Braves as a amateur free agent out of the University of North Carolina. He went to North Carolina out of his native Colorado.

At North Carolina, Hoog threw a complete game to defeat Michigan State in the regional semifinals in 1989. The next year, he set the career record for wins at the school, as well as starts, innings pitched and strikeouts, according to GoHeels.com.

After tying the record for wins, Hoog looked forward to continuing to pitch, according to The Daily Tar Heel.

"It's nice to get it (the record) out of the way," Hoog told The Daily Tar Heel. "Now, I can just get on with the rest of the season. I was going on three days rest and I was a little tired. There wasn't much on my fastball so we changed speeds a lot. I made one mistake on a change-up that let them get a 3-2 lead."

With the Braves, Hoog played his season at rookie Idaho Falls. The hurler got into 29 games in relief. He picked up four wins to one loss and five saves, turning in a 3.86 ERA. It was his only season as a pro.

Hoog soon returned home to Colorado, getting into the law and communications. He eventually founded HoogComm, counseling clients on market strategies, crisis and reputation management and other areas, according to TheSummitLA.com.

He served a decade as head coach for Skyline High School in Longmont, Co., stepping down in 2016. Tyler also played.

The father serves in 2016 on the board of directors for the Christopher and Dana Reeve Foundation, which advocates for those suffering from spinal cord injuries. Tyler Hoog also continues his recovery. A Facebook page, Hope for Hoog, periodically gives updates on his progress.
1990 Minor League Tally
Players/Coaches Featured: 2,455
Made the Majors: 997-40.6%
Never Made Majors:1,458-59.4%-X
5+ Seasons in the Majors: 416
10+ Seasons in the Minors:252
Posted by Steve78 at 11:29 PM