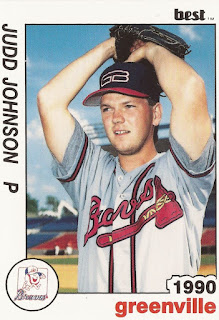 Judd Johnson made some mistakes in this April 1988 outing for the University of Cincinnati, but his team picked him up, according to The Cincinnati Enquirer.

Cincinnati picked up the 10-4 win over rival Xavier as Johnson struck out eight, but also gave up some home runs.

"I was pumped up," Johnson told The Enquirer. "But I got a little tired, too."

Johnson went on to the pros later that year, signing with the Braves. His pro career lasted a total of eight seasons. He made AAA, but not the majors.

Johnson's career began in 1988, signed by the Braves as a free agent out of Cincinnati. He went to Cincinnati out of Peebles High School in Ohio. Johnson is also credited by his formal name, Lloyd Johnson.

Johnson started with the Braves at rookie Idaho Falls. He went 2-4, with a 4.86 ERA over 16 outings, two starts.

He saw his first brief look at AAA Richmond in 1992, a one-game run. He returned there for 1993 and 1994. While Johnson played at Richmond, the scout that signed him, Hep Cronin, spoke to author George Gmelch about Johnson's progress.

"He was an undrafted player and we found him seven or ten days after the draft at a tryout camp," Cronin told Gmelch for the book In the Ballpark. "Judd is in Triple A right now and he's three and one. He pitched good and won at every level; he has a chance to maybe pitch in the big leagues."

Johnson never did make the bigs. He played one more season, with the Twins at AAA Salt Lake, ending his career.