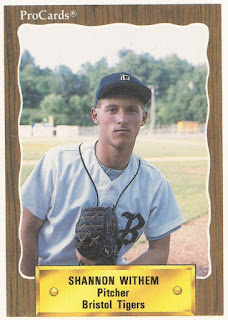 Coming out of high school in Michigan, Shannon Withem wasn't sure if he'd sign as a pro or head off to college in 1990.

As it turned out, the Tigers helped him make his decision by where they drafted him, the fifth round, he told The Detroit Free Press that August.

"I knew I would get drafted," Withem told The Free Press. "I was surprised to go in the fifth round. If I had been drafted any lower I would have just gone to college. I've made my choice, and I'm happy with it."

Withem's choice eventually led him to the majors and to Japan. He made the majors in his ninth professional season. He it for a single game and three innings.  He didn't get back.

Withem's career began that year in 1990, taken by the Tigers directly out of Willow Run High School in his native Ypsilanti.

In an August 1993 game, Withem threw a complete game, giving up two runs in a win. His catcher Tim McConnell praised Withem's performance to The Lakeland Ledger.

"He was in command the whole game and it was by far the best I've seen him pitch," McConnell told The Ledger.

Withem picked up his first AAA win against Pawtucket in August 1996 after a string of tough starts, according to The Newport News Daily Press.

"He really needed to get that win under his belt," Norfolk manager Bobby Valentine told The Daily Press. "Tonight he kept his fastball down, worked his pitches in and out, and he showed what kind of pitcher he is."

Withem returned to AAA with the Mets for 1997, then moved to the Blue Jays and AAA Syracuse for 1998. Over 27 starts that year, Withem went 17-5, with a 3.27 ERA, his best season. The Blue Jays then called him up that September.

Withem made his debut Sept. 18 against Tampa Bay. He came in with his team down 5-1. He went three innings, giving up one run and struck out two. His debut also turned out to be his final game, he didn't make it into another.