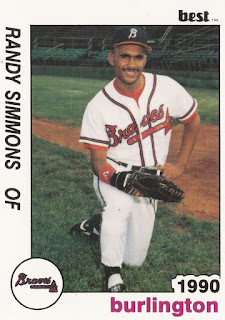 Randy Simmons hit 13 home runs for the single-A Sumter Braves in 1989. Two of them, he hit on one night.

In mid-May 1989, Simmons' Braves were in Asheville taking on the Tourists. He hit his first to lead off the game. Three innings later, Simmons hit another one, this one plating three runs, according to The Sumter Item.

After that season, Simmons only hit 13 more in his career. He played four seasons as a pro, never making it above AA.

Simmons' career began in 1988, taken by the Braves in the 19th round of the draft out of the University of Delaware.

At Delaware in 1988, Simmons was named conference Player of the Year. He also won first-team all-conference honors in both 1987 and 1988.

He started his Braves career at rookie Pulaski. There, the outfielder hit .242, with seven home runs and 31 RBI over 55 games.

That May, he followed up that two-home run performance with another home run the next day. A June Simmons two-run triple proved the difference in a 3-1 Sumter win. Later that month, he made the league All-Star team.