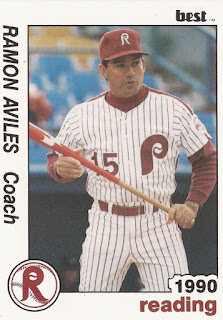 Ramon Aviles managed Taylor Buchholz in the rookie Gulf Coast League in 2000 and he liked what he saw, he told Buchholz' hometown West Chester Daily Local News the next spring.

"For a 19-year-old kid he's shown good mound instincts and he has a lot of confidence," Aviles told the paper. "He did everything right, from pitch placement to holding runners on."

By that point, Aviles had nearly two decades of experience working with young players as a manager and coach in the minors. That career came after a playing career that saw Aviles make the majors in parts of four seasons. He also made a World Series.

Aviles' career in baseball began in 1969, signed by the Red Sox as a free agent out of his native Puerto Rico.

"I always dreamed of signing a professional baseball contract, of playing in the major leagues, of playing in a championship series and then a World Series," Aviles told The Associated Press that October. "All my dreams have come true."

Aviles returned to the Phillies for 38 games in 1981. He played two more seasons in the minors, ending his playing career.

By 1984, Aviles' managerial career was underway. He managed that year at short-season Bend.

"We like to play an aggressive game," the new manager Aviles told The Spokane Chronicle after a Bend win that July fueled by Spokane errors. "If they're going to give us all those errors, we're going to use them the best we can."

Aviles moved to single-A Clearwater for 1985, single-A Spartanburg in 1987 and short-season Batavia in 1990. He also served as hitting coach at AA Reading in 1990.

Aviles continued with the Phillies through at least 2001, when he served as manager at Clearwater. He's last credited as a coach with the Nationals in 2009 at single-A Hagerstown. He never made the majors as a coach.

In 1996, Aviles served as manager at AAA for the first time, taking over mid-season. Upon taking the job, Aviles explained to the Wilkes Barre Times Leader he was looking forward to getting back on the field.

"I'm very excited," Aviles told The Times Leader. "I like to manage and I like the challenge of making decisions."