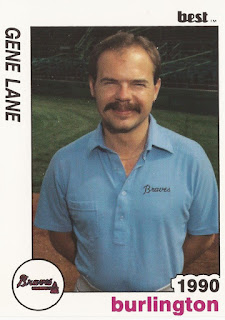 The occasion was a new mobile fitness trailer offered to golfers at tournaments.

"We work on overall body strength and flexibility," Lane told The Sun-Sentinel. "If you're in good health, you have fewer injuries. If you do get hurt, you recover more quickly. You stay around longer and, with the Senior Tour out there now, that's important."

Lane served as a PGA trainer that year, part of a six-year stint with the organization. He started as a trainer in baseball a decade earlier and he would return to baseball before continuing in a career improving health in other ways.

Lane's career as a trainer began in 1975 as a graduate of the University of Tennessee. He started with the Braves in the minors. He served as trainer for the Durham Bulls in 1980. In 1983 and 1984, Lane made assistant athletic trainer apparently in the majors in Atlanta.

Lane moved to the PGA in 1984, staying there until 1990 when he returned to the Braves as trainer at single-A Burlington. His return to baseball lasted just two years.

He then moved into other health related jobs. In 2014, he became a vice president with Applied Health Analytics in Nashville.

"We are excited to welcome Gene to our team," Applied Health Analytids chairman and CEO Robert Chamberlain said in a press release. "Gene has experience building successful employer strategies from vision to implementation."
1990 Minor League Tally
Players/Coaches Featured: 2,427
Made the Majors: 992-40.9%-X
Never Made Majors:1,435-59.1%
5+ Seasons in the Majors: 413
10+ Seasons in the Minors:250
Posted by Steve78 at 11:17 PM