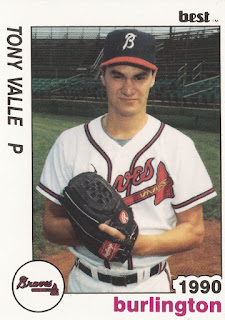 The Salt Lake Trappers respected Idaho Falls' Tony Valle, so they were thankful the wind came, according to The Deseret News.

"(The wind) helped us get to (Braves' starter Tony) Valle," Salt Lake manager Barry Moss told The News after that 1989 game, "because he's a hard thrower who comes high in the strike zone."

Valle may have been a hard thrower, but he couldn't translate that into a long career. That season with Idaho Falls was his first season as a pro. He would get just one more.

Valle's career began that year in 1989, taken by the Braves in the 13th round of the draft, out of Texas State University.

He moved to single-A Burlington for 1990, getting 12 outings, seven starts there, with a 4.06 ERA. That July, Valle was involved in a trade, swapped to the Mets for major leaguer Doug Sisk.

With the Mets, Valle was sent to single-A Columbia. He also moved to relief. At Columbia, Valle got into 11 relief appearances. His ERA, though, went up to 6.98. It was his final year as a pro.