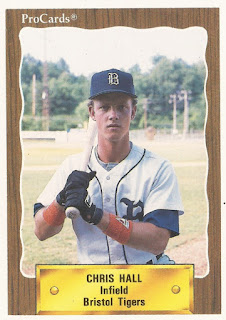 Chris Hall earned two honors in June 1989 - one helping lead to the other.

In the first, his play at Don Lugo High School in Chino, Calif., won him first-team all-conference honors, according to The Chino Champion. In the second, the Tigers selected him in the 18th round of the draft directly out of Don Lugo.

Hall ultimately chose to sign with the Tigers and turn pro. His honors as a pro, however, turned out to be few. Hall played two seasons professionally. He briefly made single-A, but made it no higher.

Hall's career began that year in 1989, taken by the Tigers as a 17-year-old infielder out of Don Lugo.

Hall returned to Bristol for much of 1990, getting into 54 games that year. He also got into two at single-A Fayetteville. He hit .196 overall. He also hit what turned out to be his only professional home run at Bristol.