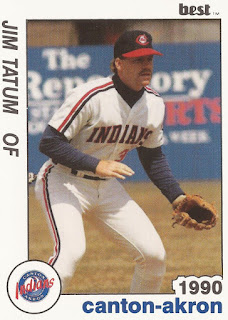 Jim Tatum went to Japan in 1997 and he wasn't expecting what he encountered.

What he encountered with the Yakult Swallows, he told The New York Daily News in 1998, were coaches who made him field 100 balls in warm ups each day, then 100 more fly balls.

"At first I thought, 'These guys are trying to kill me,'" Tatum told The Daily News that spring. "Then I became mentally strong. I thought, 'I'm going to survive.' The practices were tougher than the games. That's what they want. They want it so the games just come naturally."

Already a veteran of parts of four major league seasons, Tatum used his experience in Japan to get a fifth, a 35-game stint as a utility man with the Mets in 1998.

Tatum's professional career began in 1985, taken by the Padres in the third round of the draft out of high school. He played that season at short-season Spokane, hitting just .228.

He played the next two seasons at single-A Charleston, then hit AA Wichita in 1988. Skipping 1989, Tatum signed with the Indians for 1990, playing at AA Canton for two months before being released. He finished out the season in the Brewers system.

Tatum hit AAA Denver in 1992, hitting .329 with 19 home runs. He debuted in the majors that September, going 1-for-8 in five games. Tatum soon switched teams again, selected by the Rockies in the expansion draft.

It was with the Rockies in that expansion season that Tatum saw his most major league playing time - 92 games. He was playing winter ball in Venezuela when he was selected.

That May, Tatum hit his first major league home run, a grand slam off Dan Plesac. The grand slam was not only a first for Tatum, it was a first for the Rockies. He went on to hit .204. That was also his only home run.

After a season back at AAA, Tatum returned to the Rockies in 1995, for 34 games. They didn't start well. The Rockies sent him down in May, having to cut their roster.

But Tatum heard about being sent down from teammates, he told The Daily News in 1998. He then left early and was charged with driving under the influence. Called back up in June, Tatum hit .235 on the year.

For 1996, Tatum got into seven major league games, two with the Red Sox and five with the Padres. Then came Japan. He hit .309 and got seven doubles with Yakult, before signing back with the Mets for 1998.

In late April, Tatum hit major league home run No. 2 against the Astros, it was a game-winning, three-run shot. In May, Tatum got another game-winner, a single. It was an at bat that Mets Manager Bobby Valentine made sure Tatum was ready for.

"He asked me three times, 'Are you going to get this guy?' And each time I said, 'No doubt,' '' Tatum told The New York Times after the game. ''He showed confidence in me by sticking with me in a big situation.''

That spring, The Times noted Tatum's playing history, the teams he'd played for and the positions. At some point, The Times wrote, Tatum had played each position in a game.

''I've just been doing whatever it takes to stay in the big leagues,'' Tatum told The Times.

Tatum played two more seasons in the minors, including a 10-game stint in Mexico in 2000, ending his career.