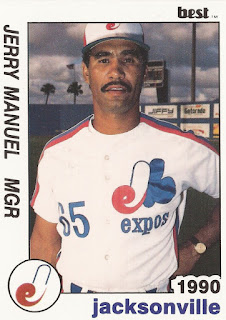 Named the manager of the White Sox in December 1997, Jerry Manuel explained to The Associated Press how he planned to work with his players..

He planed to develop a relationship, he told The AP.

"That is the thing I'm going to start out with," Manuel told The AP. "If you impart rules without a relationship that equals rebellion."

Manuel's career in baseball began in 1972, taken by the Tigers in the first round of the draft out of Cordova High School in California.

Manuel started with rookie Bristol, then made AAA Toledo in his second season. In 1975, he made the majors. He got into six games that year with the Tigers and 54 the next.

Manuel went on to return to the majors for brief stints in three more seasons as a player. He then went on to a new career in coaching.

By 1986, Manuel was hitting coach with the Expos at AAA Indianapolis. He got his first managerial job in 1990 at AA Jacksonville. Then, in 1991, he returned to the majors as third base coach for the Expos in Montreal.

Manuel stayed in that role through 1996. After serving a year as bench coach for the Marlins, the year the Marlins won the World Series, Manuel moved to the White Sox and the manager's office.

Manuel's White Sox won 80 games his first year, 75 his second.  Then, in 2000, Manuel's team won 95 games, losing to the Mariners in the ALDS. Manuel also won Manager of the Year honors.

After his Manager of the Year win, Manuel recalled to The AP his spring speech to his team.

"You don't have to necessarily like me," Manuel recalled to The AP. "I'm not going to be a player's manager or whatever they want to call it. I just want you to do what's best for the team and respect the office of manager more than anything else. Hopefully that has worked here for the White Sox."

Manuel continued with the White Sox through the end of 2003, when an end-of-season collapse did him in.

He returned to the manager's office in mid-2008, taking over the Mets after the team fired Willie Randolph. He continued with the Mets into 2010.

In October 2008, the Mets took the interim tag off Manuel's title, giving him a two-year deal. After signing his deal, Manuel told The AP what he believed his team needed to do.