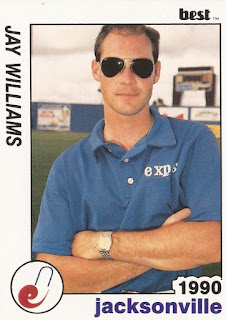 Jay Williams made it up to AA Jacksonville for 1990, but he still had his eye set on his ultimate goal, the majors, according to his Best card.

"I'm real happy to get the promotion," Williams told Best, having spent the previous season at single-A Rockford. "It's nice to get the chance to move to a higher level."

Williams' career as a trainer began out of Washington State University with the Milwaukee Brewers.

He spent four seasons with the Brewers, three in rookie ball and one at single-A Stockton. He then moved to the Expos and Rockford.

Williams joined the Braves for 1994, serving as trainer for the Durham Bulls, then AA Greenville for 1998 and 2002. He served as trainer at Richmond in 2005.

He moved to the Giants system as a minor league coordinator in 2007, continuing to 2013.

In 2014, he returned to Greenville as head athletic trainer at Mauldin High School. He explained to The Greenville News in 2015 the trainer's goal.