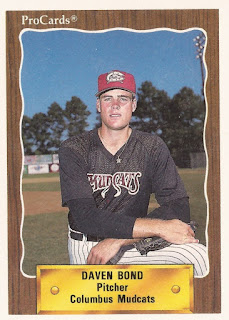 Bond's playing experience consisted of seven seasons as a pro. He never made the majors, but he did make AAA with the Yankees in 1991. He then went on to a coaching career that led him to CCU in 2011, a head coaching job he continues to hold in 2016.

"The most surprising thing is how well we have done and the things that we have been able to accomplish on the field," Bond told the school's site after that season. "The girls have certainly exceeded any expectations that I had for our first year. I am so proud of them and how God is working in their lives. It has been an amazing year."
1990 Minor League Tally
Players/Coaches Featured: 2,386
Made the Majors: 979-41.0%
Never Made Majors:1,407-59.0%-X
5+ Seasons in the Majors: 408
10+ Seasons in the Minors:245
Posted by Steve78 at 1:00 PM