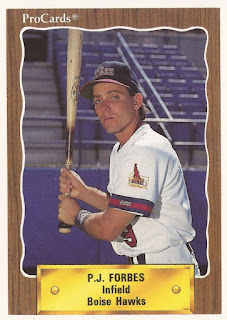 What got him to 13 seasons - two with brief time in the majors - he said then: His approach to the game.

"I knew I was short on talent – that was no secret to me," Forbes, who spent three seasons with AAA Rochester, told the Red Wings yearbook in 2009. "I knew if I was to go anywhere, I'd have to compensate for my shortcomings. That's why, in everything I ever played, I tried to defeat the game and the opponent by out-thinking them and by out-working them."

Forbes career began in 1990, taken by the Angels in the 20th round of the draft out of Wichita State University.

At LSU, Forbes helped Wichita State to the 1989 College World Series title. The next February, he hit a grand slam in a game that sparked the Shockers to a win over LSU. "I hope my home run relaxed everybody," Forbes told The Orlando Sentinel afterward.

Forbes made AAA Vancouver in 1994 and he played there for three seasons. He signed with the Orioles for 1997. In 1998, he made Baltimore.

"I like Forbes's tenacity," Orioles manager Ray Miller told The Washington Post that spring. "He's like a spit-in-your-eye guy at the plate. . . . I'd say we're a little short in the middle of the infield in our organization depth-wise, and Forbes is very interesting to me. . . . It seems like you can play him anywhere."

Forbes debuted with the Orioles that July. He played seven of his nine games at second base. He picked up one hit in 10 at bats.

Forbes then returned to the minors until 2001, when he picked up two hits in seven at bats for the Phillies. His final professional time came the next year at AAA Scranton.

By 2004, Forbes started his managerial career at single-A Lakewood. He managed as high as AA and continued through 2014. He then retired.

"I want to be in the backyard," Forbes told The Joplin Globe in February 2015 of his retirement after a quarter century in the game. "I want to be in the front yard. I want to be throwing wiffle balls. I want to be shooting baskets in the driveway. I want to be throwing the football in the street — things I've never been able to do in the summer time. I looking forward to sitting on my deck, grilling and having a beer. Those are things I've never done."
1990 Minor League Tally
Players/Coaches Featured: 2,376
Made the Majors: 978-41.2%-X
Never Made Majors:1,398-58.8%
5+ Seasons in the Majors: 407
10+ Seasons in the Minors:244
Posted by Steve78 at 11:12 PM