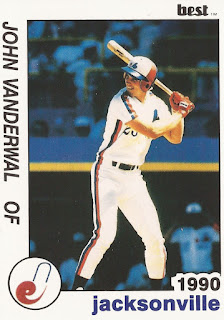 John Vander Wal liked fastballs and that's what he got in this September 1995 game, according to The Associated Press.

Vander Wal turned that fastball into a two-run triple, helping his Rockies to a 10-5 win, The AP wrote.

Vander Wal was hitting fastballs in his fourth major league season that year. He went on to hit them in 10 more. By the time he was done, Vander Wal got into more than 1,300 major league games, with a career .261 average and 97 home runs.

He also spent a good portion of that time as a pinch-hitter.

Vander Wal's career began in 1987, taken by the Expos in the third round of the draft, out of Western Michigan University.

Vander Wal started at short-season Jamestown and single-A West Palm Beach. He made AA Jacksonville in 1988 and then AAA Indianapolis in 1990. In 1991, he made Montreal.

Vander Wal then continued with the Rockies into 1998. Along the way, Vander Wal hit .347 in 101 at bats in 1995, by far the best average of his career. He also picked up 28 pinch hits for the club that year. Vander Wal moved to the Padres in late-1998, helping the club to the World Series.

"You have to be thankful for what you receive in this game," Vander Wal told The New York Daily News after starting for the Padres in Game 2. "I haven't played every day but I've been fairly successful pinch-hitting. Hey, I've been around seven years. That's the positive outlook you have to have."

His 2001 season was his 10th in the majors, it was also his first with more than 400 at bats, The New York Times noted the next February after Vander Wal was traded to the Yankees. Vander Wal finally got regular playing time in 2001.

He told The Times that it made him think again about his other role as a pinch-hitter..

''I really didn't appreciate what the pinch-hitter goes through until I did play, the last couple of years,'' Vander Wal told The Times. ''Then you step back and go, 'Whoa, this is tough.' It was much tougher last year than the years before.''