Note: The Greatest 21 Days originally interviewed Jose Castro in 2014. The interview is being reposted and updated to include new photos of Castro taken at Turner Field in June 2016, with Castro serving as Braves assistant hitting coach.
Part 1: The Maximum | Part 2: Another Door
Part 3: On Top 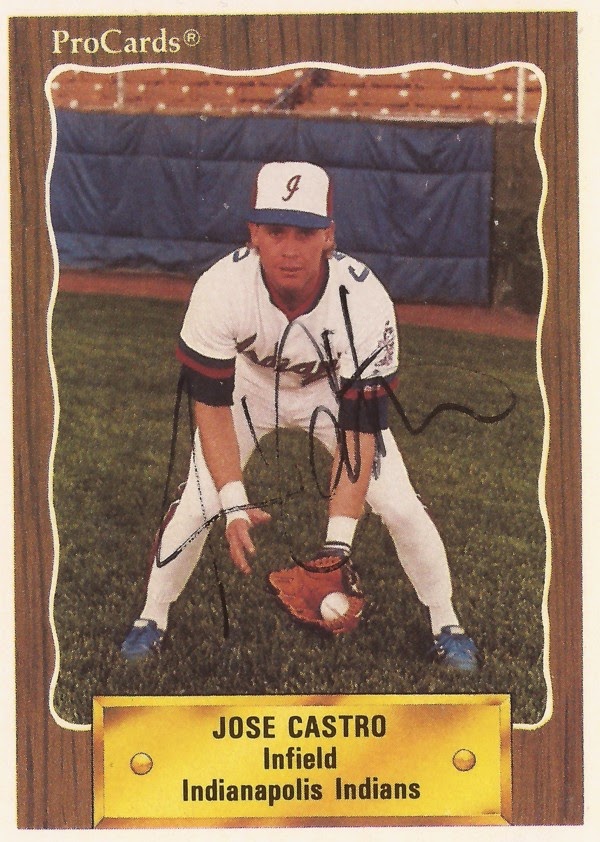 Jose Castro spent his first five seasons with the Phillies organization. He made AAA, but he didn't make Philadelphia.

He then found himself traded to a new organization, the White Sox. He went on to play in three other organizations in his 14-season professional career, trying to make that jump to the majors in each one.

"They close one door on you and there's another one that opens," Castro told The Greatest 21 Days. "That's how I look at it.

"You've got to go out there and prove yourself and do the best you can, prepare for that season, which you do in the wintertime, and go play baseball."

When the door finally closed on Castro's long playing career, another one opened again: to coaching. That door eventually took him to the major leagues. Castro spent part of 2008 as the Mariners' hitting coach. He then returned to the bigs in 2014 as quality assurance coach for the Cubs.

Castro spoke with The Greatest 21 Days by phone on an off day in early September 2014. He talked about his time growing up in Florida and learning the game after his family left Cuba.
He also talked about his time in the minors, his turn to coaching and, finally, his arrival and work in the majors. He moved to the Braves for 2015 as assistant hitting coach, returning there for 2016.

Castro's career began in 1977, when he was taken by the Phillies in the 27th round of the draft out of Jackson High School in Miami. He played those five seasons in the Phillies organization, before his move to the White Sox.

With the White Sox in 1982, Castro played at AAA Edmonton. He hit .263 in 129 games. He later followed the organization's AAA club to Denver and to Buffalo.

"That was a challenge," Castro said of his first move to the White Sox system. "It's hard to play in the minor leagues, due to the traveling and places to stay and just the whole package. It's not an easy gig but if you love the game, you just go through it."

His final season was his 14th as a pro.

"It's a grind," Castro said of sticking around that long. "It's a mental grind. You just want to keep proving to yourself that you can do it. You know, sometimes you're stubborn with it, or however you want to look at it, but I never quit."
Castro said he always just pushed forward.

"It doesn't matter how bad it is or if you think, by any chance or any doubt or something, you just keep pushing, keep working," Castro said. "That's how you go about life in general, not just baseball."

There were also sacrifices to playing, Castro recalled. He was away from his family, first his parents and then his wife and kids. He said he thanks them all for pulling for him for so many years, "and they're still doing it," he said.

In 1983, Castro went through it and helped the Denver Bears to the American Association championship.

Castro noted that minor leaguers work toward the same goal, making the majors, and it happens to end in a championship.

"Working together for one goal, to get better, to get moved up, to play in the big leagues and it happens during that run you win a championship," Castro said. "It's a great feeling ... it doesn't matter where you win it, it's an awesome feeling."

Castro started that coaching career began with the help of a former manager of Castro's, John Boles.

"I knew it was coming to an end," Castro said of his playing career. "I was very fortunate to have played for John Boles. He just retired this year. He was my mentor through this whole race, or this career of mine."

Castro recalled Boles first mentioning the possibility of coaching to him in the winter of 1989, before the 1990 season. Castro said he would like to stay in the game as a coach.

He went from playing to coaching in 1990, starting with Indianapolis and ending as hitting coach with the Expos entry in the New York-Penn League, Jamestown.

"Through John Boles and his help I'm still doing this," Castro said.

His many years as a player included a couple springs, Castro recalled, that he seemed close to making the majors. He was one of the last players cut.

When he didn't make it, he recalled, he would go back to minor league camp and keep working.

But it took Castro a few more years in the minors to finally make the majors, 18 more years to be exact. (Go to Part 3)