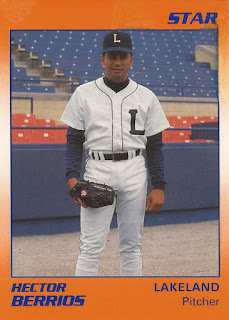 Hector Berrios showed out of high school that he knew how to take advice, according to The Eugene Register-Guard.

An outfielder for James Monroe High School in the Bronx, Berrios recalled to The Register-Guard in 1984 a scout telling him a lack of speed would prevent him from making it professionally in the outfield.

"The scout said, 'Work on pitching, and when I come back you should show me that you have learned a little bit,'" Berrios told The Register-Guard. "So I got real serious about pitching, because I wanted to play professional baseball."

Berrios' seriousness paid off with an eight-season career as a pitcher in professional baseball. He made AAA, but not the majors.

He has since gone on to another career in professional baseball, one where he gives the advice trying to send pitchers on to the majors as a minor league pitching coach.

Berrios' career began that year in 1984, signed by the Royals, having played at the Bronx' James Monroe High.

He started with the Royals at Eugene. He got 22 outings, two starts, posting a 2.53 ERA. He went six innings in one of his starts, giving up three earned and taking the loss.

Berrios returned to Eugene for 1985. He also got time at single-A Fort Myers. After not being recorded as playing in 1986, he returned with the Tigers in 1987 at single-A Fayetteville.

Berrios arrived in the Angels system for 1991 and he saw his first time at AAA. He played in 17 games at AAA Edmonton that year, posting a 3.86 ERA.

Berrios played in one more season, split between the Dodgers and Cubs, both at AAA, ending his playing career.

By 1998, Berrios started his new career as a minor league pitching coach. He served that year at single-A Hagerstown. He stayed there through 2000. He then moved to single-A Charleston, high-A Dunedin and then short-season Brooklyn.

Berrios ended up spending six seasons as pitching coach for the Brooklyn Cyclones.

"It starts with our pitching coach, Hector," Brooklyn pitcher Stephen Clyne told NY Sports Day in 2007 of Berrios. "After every game he tells us what we did right, what we did wrong and we learn from our mistakes. Our next time out, we go out there and try to correct those mistakes. I think it all comes down to our pitching coach, the way we listen and the way we prepare ourselves."

Berrios moved on to AA Binghamton for 2009 and the Gulf Coast League for 2010. He then went through the Dodgers system, coaching at Rancho Cucamonga and Great Lakes. For 2016, he's serving as pitching coach at short-season Williamsport in the Phillies system.

Berrios explained his approach for 2016 to The Williamsport Sun-Gazette.

"We're hoping to lead the league in fewest walks allowed," Berrios told The Sun-Gazette. "That will limit baserunners and it sets the tone for more good things to happen."