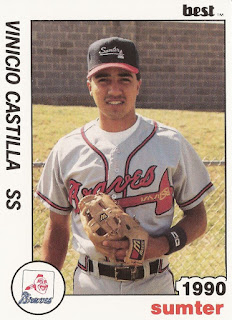 Running down his 1990 Sumter Braves team, manager Ralph Rowe had a few things to say about his young shortstop, Vinicio Castilla.

"He's got a great pair of hands," Rowe told The Sumter Item in May of that year, "and, at shortstop that's what you have to have. I don't think he can be a home run hitter, but it's working out that way right now.

"He's definitely got a chance," Rowe continued, "if he can hit for a little power."

Of course, Rowe was speaking before anyone had heard of Denver baseball.

Castilla, better known by the more informal name Vinny Castilla, was signed by the Braves out of the Mexican League in March 1990. He made it to Atlanta in September 1991, playing 12 games. He played another nine for the Braves in 1992.

More importantly for Castilla, though, was the Braves left him unprotected in the expansion draft. The Rockies selected him with the 40th pick.

Castilla made an immediate impact. He quickly beat out Freddie Benavides for the Rockies starting shortstop position. He later switched to third, he was too big for short.

Of course, that stretch was not only Castilla's power years, but others' power years as well. As The New York Times reexamined the 1998 home run chase in July 2009, the paper noted only five players, including Castilla, have remained untarnished related to steroids, "And even those five surely have their skeptics," The Times noted.

Nonetheless, Castilla became a Denver fan favorite. He was also traded after 1999 to the Devil Rays. He returned to the Colorado lineup in 2004 and again in 2006, retiring as a Rockie.

"In the brief history of our franchise, few players have endeared themselves to Rockies fans as much as Vinny," Rockies president Keli McGregor told The Associated Press after Castilla's 2006 return.

"That is why he is Vinicio Castilla," Mexico manager Homar Rojas told MLB.com Feb. 6. "He's been a good hitter for a long time. Nobody is surprised when he does something like that."